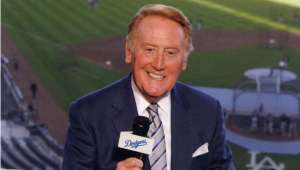 When I heard the news that longtime sportscaster Vin Scully had died at the age of 94 I instantly heard his voice in my head. He had a distinctive tone and style. The voice of the Dodgers for 6 decades, longer tenured than anyone else in the business, did a tremendous job calling games. Anyone in Southern California who followed the Dodgers knew his signature opening for every game, "It's time for Dodger Baseball."

But it wasn't just the way he spoke. What he said was always interesting, insightful and often full of introspection and philosophy. Even something as mundane as commenting on an injured player being day to day. "Aren't we all", he commented.

Vin Scully wasn't just a master at his craft

He was a fine human being, a true class act. There have been many terrific tributes to Vin Scully. Many commented on his coverage of Hank Aaron breaking Babe Ruth's home run record. Ted Robbins's piece for NPR is a good one.

Then there is the real Hollywood moment when Kirk Gibson limped to the plate and hit a pinch-hit walkoff home run in the 1988 World Series. It was legendary. I was watching the game and living in Encinitas, California at the time while I worked as a radio broadcaster in Long Beach. His comments doubly impacted me as both a lifelong baseball fan and someone who was getting to live out my dream of working in radio.

Scully's classic line when the ball cleared the outfield wall was magic. And just another example of him calling great moments with class and cleverness.

"In a year that has been so improbable, the impossible has happened.”

Thanks, Vin Scully. You made listening to a baseball game a special thing. More than that, you lived a good, full life and deserve all the accolades.